Putting it really simply, gravel and adventure bikes are drop bar bikes designed to take on a wider range of terrain than your average road bike. 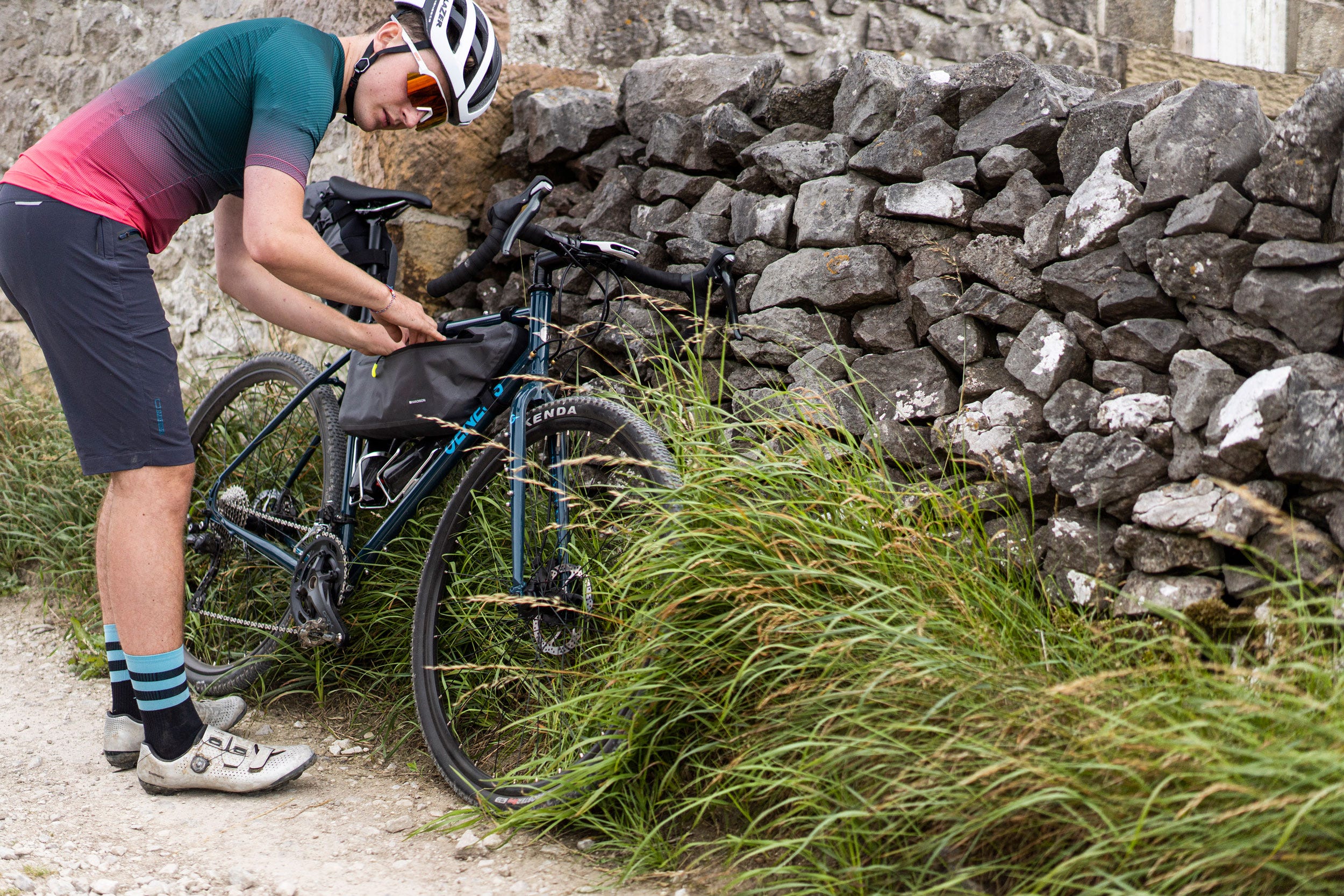 What Makes A Gravel Bike?

The term ‘gravel bike’ originated in the USA, where many states do genuinely have miles and miles of gravel tracks and roads that you can ride without seeing a single soul – that’s the beauty of a country with such a large landmass and wide variety of climates. In the UK the term ‘adventure bike’ is a little more appropriate as actual gravel isn’t all that easy to find, and you’re more likely to end up riding through forest roads, towpaths, farm roads even across fields – essentially anything that isn’t tarmac.

That said, gravel and adventure bikes aren’t a world apart from their road bike cousins and - aside from the noticeable difference in tyre size - at first glance they might seem very similar indeed. When you look at bit closer the differences are more subtle than, say, between a road and mountain bike, but stark enough that if you try and take on a gravel adventure on a standard road bike you’ll find things get rather difficult pretty early on (and not just because you’ll ruin those nice, supple road tyres upsettingly quickly).

This is a guide that not only helps you understand the differences between gravel/adventure bikes and road bikes, but also gives you an idea of where to start if you’re looking to buy one yourself.

If you look at the geometry of a gravel bike compared to a road bike, you’ll see that while the two look very similar there are a few differences that make a noticeable difference to the way the bikes ride. First off, gravel bikes tend to have taller head tubes which mean a higher riding position, and the head tube angle will generally be slacker as well, to make the steering less twitchy. On top of that, the bottom bracket will be lower and the wheelbase longer, another two concessions to improve the stability of the bike. Basically, gravel bikes are designed to be as stable as possible because you’re not riding them on nice, predictable roads (insert joke about British roads here), you’re often on loose, less predictable surfaces like, you know, gravel…

But as with everything the above isn’t always the case, and if you’re after a gravel bike with a particular type of ride – for example you want something that’ll work as a road bike too – then it’s best to check out the geometry of the bike for more than just sizing before you buy. And remember, while all our bikes on Freewheel have sizing charts, everyone is proportioned differently so it’s always worth looking at both the sizing and geometry charts (like the examples below) before you choose a bike.

If you already own a bike and want to know how another bike compares, then stack and reach are the two measurements you should be looking at. Stack and reach is a sizing method that was developed to make it easy to compare bike sizing between different bikes and different brands. As bike design has changed, things like compact geometry have made it difficult to cross compare bikes, but stack and reach are two consistent measurements you can use to determine whether another bike has a similar fit to your current ride.

Of these three, aluminium tends to be the cheapest option and so most entry-level bikes will have alloy frames. That’s not to say that you can’t make a very nice frame out of aluminium, because you can, but it’s definitely the most cost-effective material and if you’re on a budget it’s a good place to start.

Steel is an all-time classic frame material. Once upon a time all bike frames were steel, and there are plenty of reasons that it’s still a relevant material today in a world of carbon bikes. Steel isn’t light, but it is strong, plus it’ll bend rather than break so it’s extremely crash resistant. And if you somehow do manage to break a steel frame, it’s easily weldable back together (better by an expert than at home, mind you) so that bike can keep on going for almost as long as you want it to.

Carbon is the frame material of choice for almost all mid-to-high-end road or gravel bikes. The beauty of carbon is that you can build a super light frame that’s strong enough to ride, and you can manipulate the layup of the carbon in the frame to give it the qualities that you want in the areas that you want it. The flip side is that because it’s such an amazing material, it’s not cheap.

While there are a few options on the market, most gravel bikes now come with groupsets designed specifically for the rigours of gravel/adventure riding whereas a few years ago it would be a mish-mash of road groupset parts and even some MTB components.

Shimano were the first to the gravel party with GRX, which was the first dedicated groupset for gravel and adventure riding. One of the best things about GRX is the number of options there are: 10-speed, 11-speed mechanical and 11-speed Di2 (electronic shifting), with double or single chainset options for the 11-speed versions. You can check out the specifics of the GRX groupsets here, but with raised braking pivots for better braking from the hoods, improved clearance at the front mech/chainset for larger tyre sizes, a rear mech with a clutch and plenty more innovations, it’s safe to say GRX isn’t just a road groupset with a new paint job.

On most drop bar bikes, wheel size isn’t a question, it’s 700c. But many gravel and adventure bikes can also accommodate 650b wheels which means you have a choice to make. A lot of gravel bikes have a maximum tyre clearance of something like 38c, but if your bike can fit 650b wheels you can ramp that up (a lot). That’s because the 650b wheels have a smaller diameter – if it seems confusing, a 650b wheel is 27.5” diameter, while a 700c wheel is a 29” diameter – and smaller wheels means more clearance to fit larger tyres in the frame. Oh, and that measurement is tyre edge to tyre edge, not rim to rim, not that the specifics of wheel sizing are particularly important when it comes to choosing a bike.

There will still be a recommended tyre size for 650b wheels, though, so don’t go crazy and order the largest tyres you can find, they probably wont fit.

The most important thing when you buy any bike is this: buy the one that you want to ride. Ultimately, figuring out whether you bought the right bike or not pretty much comes down to how much you end up riding it, so the bike you choose needs to not only be the right size and spec, but also make you want to use it as often as possible. Bike riding is meant to be fun, after all.

We think you are browsing from overseas. Unfortunatley we can only delivery to addresses within the UK however feel free to have a look around our site.