This website is operated by H. Young (Operations) Limited. It uses cookies and other similar technologies to collect information about how it is used and what users’ preferences are. This information helps us provide users with a better browsing experience, improve how our website operates and the product selection and services available through it, and deliver targeted advertising and marketing that is more relevant to our users’ interests. For more information, see our Cookie Policy.
We require your consent to set certain non-essential cookies on your device. By continuing to browse our website without changing your cookie preferences, you consent to us setting cookies on your device. You can withdraw your consent at any time by changing your cookie preferences. Our Cookie Policy explains how you can do this.

What you need to clean a bike

Cleaning your bike is a pretty easy task, but one made even simpler by using the right things. Here's our guide to keeping your pride and joy sparkling 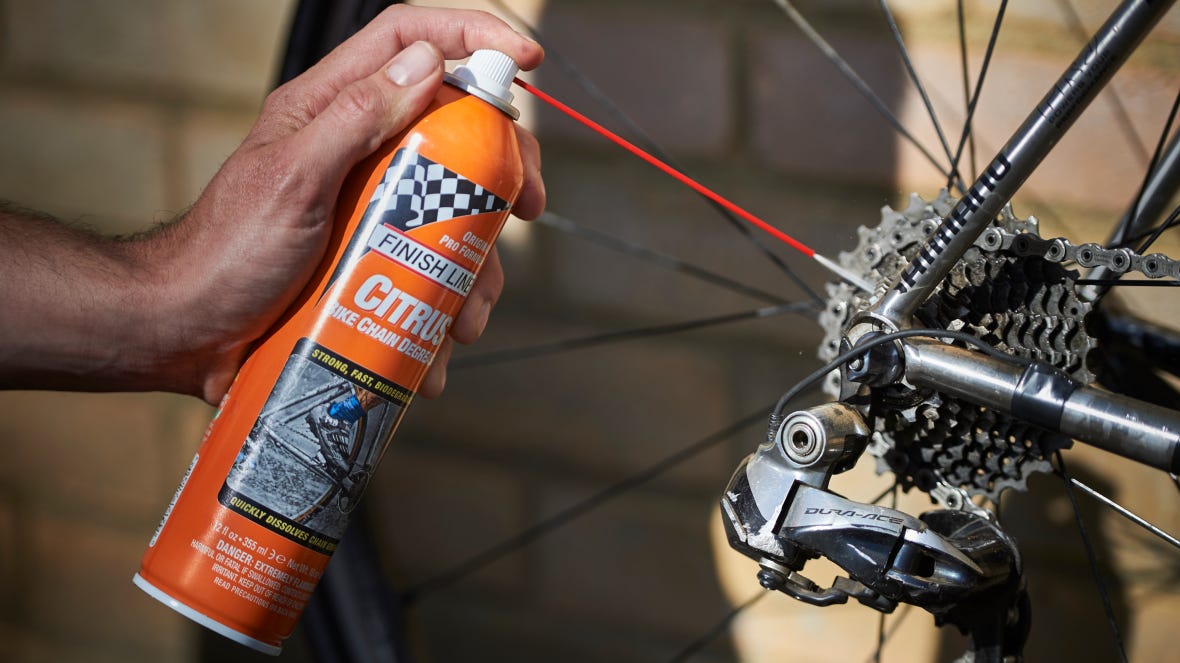 While leaning your bike against a wall is a tried-and-tested method that’s been used to good effect as long as bikes (and walls) have been around, there really is no substitute for getting that bike off the ground. First off, not having to squat down to get to the bits that really need cleaning is great for your knees and back, and on top of that it just makes life easier because the stuff that you’re going to take the most time cleaning is nearer eye level.

Second, cleaning and lubing a chain is far easier when you can just turn the pedals – anyone who’s ever tried balancing the seatpost against their head while turning the pedals with their right hand and applying lube to the chain with their left knows what I’m talking about.

Park Tool have an abundance of work stands on offer, from the basic PCS-9 tripod-style, to the fancier PRS-25 aluminium stand that’s about half the weight of the PCS-9 and has self-articulating legs as well. Or, if you want the full faux-pro mechanic look, the PRS-22.2 lets you hold the bike without clamping the frame or seatpost, using the front QR/thru axle instead and supporting the bike under the bottom bracket.

There are about four others as well, so make sure you check out the full range before you buy. 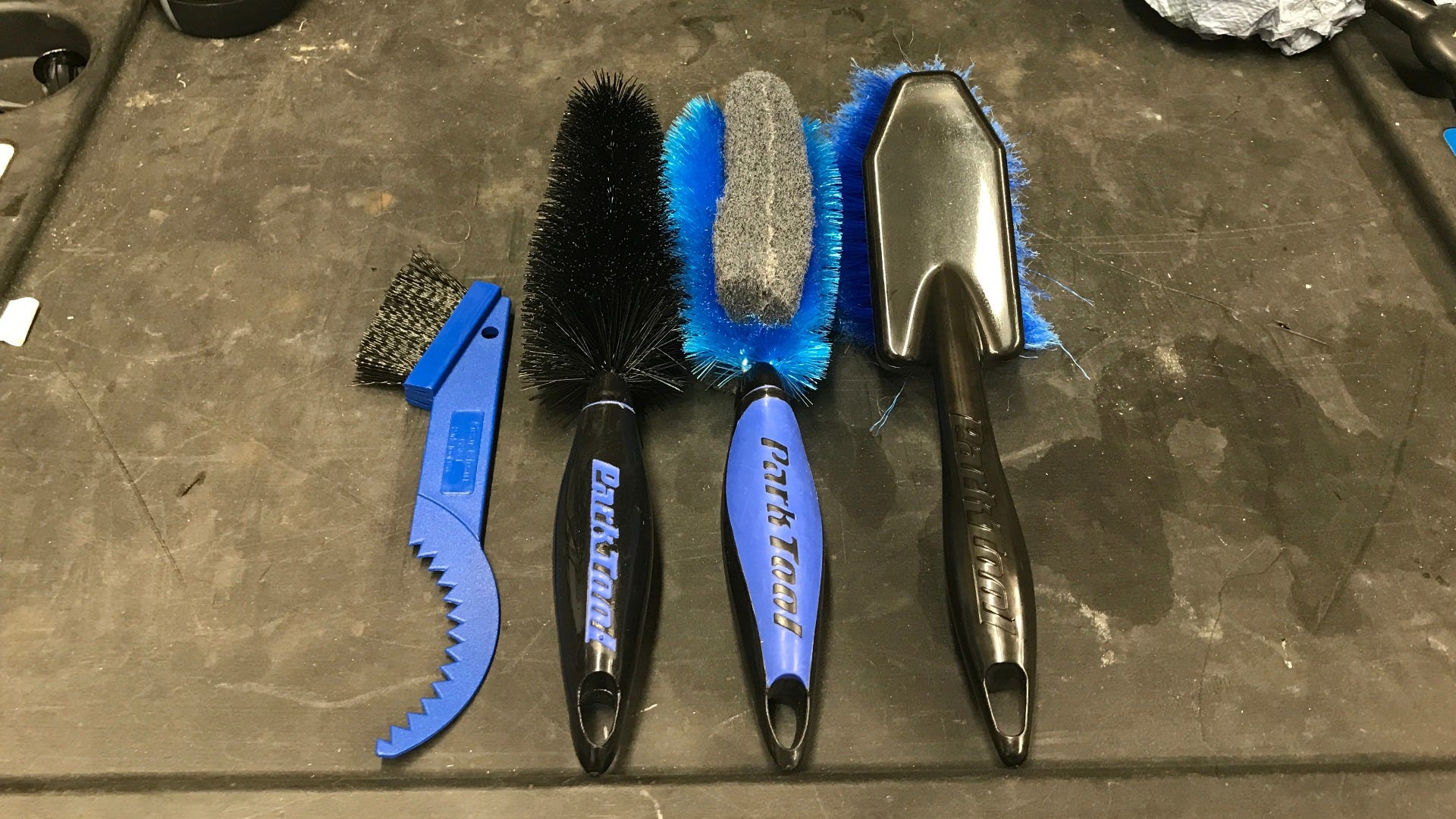 While you can get away with blasting some kinds of dirt off the bike with a pressure washer or hosepipe, there’ll be plenty of occasions where the dirt needs a bit of agitation to help it along (that’s a fancy way of saying scrubbing).

For those moments when you have to shift that gunk, a good set of brushes comes in very handy. I mean, you could always go down to the local hardware store and grab yourself a nice, course brush, and that’s fine, because not everyone likes their paintwork to keep looking nice, and if you’re after the ratted look, then go for it. But really a proper set of brushes designed to clean the various parts of your bike is a smart investment because they won’t scratch parts up, and they should last for absolutely ages providing you look after them.

Park Tool and Finish Line both offer brush sets, that contain brushes for the frame, drivetrain, and those hard-to-reach spots like in between the cogs on your cassette.

Water is good at cleaning your bike. Super Bike Wash is even better at cleaning your bike. Outside of being significantly pinker than water, Finish Line’s Super Bike Wash contains five different solvents designed to tackle hydrocarbons, other organic compounds and surface tension films. Basically, it eats away at the nasty stuff sitting on your frame and components, making it easier to wash off.

Better than that, it’s environmentally safe and doesn’t contain detergents, phosphates, benzene or chlorinated solvents so you don’t have to worry about the tortoises wandering around your back garden after you’ve washed the bike.

If you want to make sure that drivetrain is absolutely pristine there’s only one answer: Speed Clean. Not only does it remove grime in seconds, it evaporates so you can use with without needing to rinse the bike off afterwards.

Seriously, nothing will turn your chain from black to shining silver as quickly as a can of this stuff. 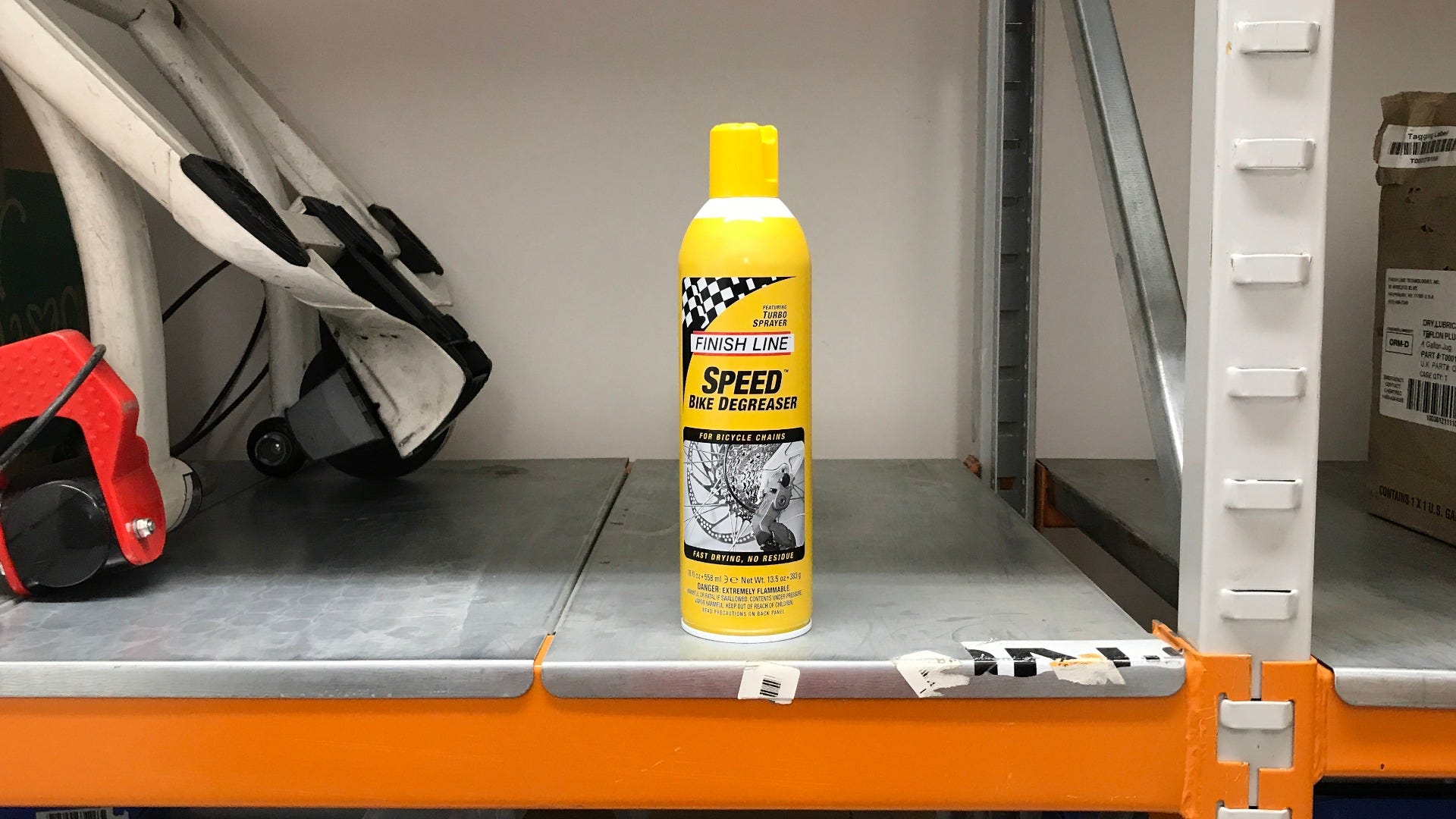 Ah lubrication, the part of chain maintenance that confuses far more people than it needs to. Basically, wet lube is a lube that’s oil-based and heavier. It’s good in wet conditions because it sticks to the chain very effectively, but the downside is that it picks up and holds onto a fair bit of road gunk. Again, not so bad in wet conditions when there’s water around to move that stuff on, but in the dry that accumulated crap tends to stick around and will increase chain wear.

Dry lube is lighter and will leave your chain less likely to pick up rubbish as you ride along. The flipside of which – as you’ve probably already guessed – is that it doesn’t last as long and isn’t particularly good in the rain so you’ll need to re-apply after a wet ride.

But the basic point is that chains are made up of loads of little moving parts and need lubrication to keep them working as well as possible. Ride with a dry, unlubricated chain and not only will you be able to head the distance (aka squeaky as hell), you’ll wear the thing out in double quick time.

Because sometimes the simplest things really are the most effective.